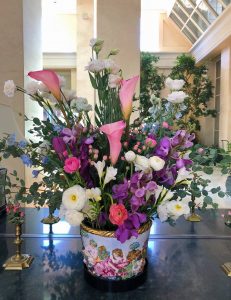 Part of the charm of San Francisco Towers are the exquisite floral displays in the public areas of the building, created by the Flower Committee.

Of its thirty members, the Flower Committee has four members (plus a weekly flower carrier) who specialize in purchasing and arranging the flowers: Joan Tayler, Marilyn Jacobson, Sophie Lee, and Fukan Yen.

Joan and Marilyn spend Thursday mornings at the San Francisco Flower Mart, which was founded by Japanese flower-grower immigrants around the turn of the century. It is one of the oldest and most successful Japanese-American corporations in the U.S. There are more than 60 vendors using Mart space. The flowers used to be strictly local but now include imports from as far away as Israel.

The Flower Committee shoppers wander down the aisles of flowers displayed in giant buckets, fishing out a stem that looks interesting: a branch with berries, a particularly beautiful rose, or some palm leaves that would make a good background. Usually five or six stems are tied together and priced as a group, anywhere from $6.50 to over $32.

Joan and Marilyn base their selections on what will go well with what is still usable from the previous week, and any upcoming holiday. Independence Day next month? Their choices will be red, white, and blue. The total Towers bill can be as much as $150, which the Towers staff will later pay.

A grocery cart in the garage awaits the returning buyers. It is loaded with the bunches and taken to Craft Room 3, where Fukan and Sophie unwrap the flowers. They set aside the pieces they want for the arrangements that are developing in their heads. Fukan says she has to see the flowers before she can decide what she will design, and Sophie agrees. They begin work on their signature still-life arrangements and soon are joined by Joan and Marilyn, who seem to specialize in large bouquets for the lobby and other public spaces. Although questions are freely answered, the room is largely silent as the women focus on what they are doing with the flowers.

Flower arrangers have the showiest jobs, but a lot of Flower Committee work goes on behind the scenes. There are the carriers and the vase washers and someone who arranges the memorials to departed residents.

There is also a small team that works on Wednesday night after dinner collecting all the arrangements from the first floor, and the small vases from dining tables in Assisted Living and the Staff Lounge. They bring these to Craft Room #3, where the vases are washed and the flowers edited (“This daisy looks like it will survive another week, but throw away that tulip”). There are carriers who take weekly turns driving the buyers to the SF Flower Mart, helping carry the selected flower bunches, and delivering arrangements to their spots.

Flower Committee Chair Joan Tayler says she is not worried about the relocation in a few months of the Flower Mart to temporary space on Potrero Hill, while a multistory office and condo building is being erected on the longtime Brannan Street site. The Flower Mart is guaranteed a space in the new building. At present, it can take as much as 45 minutes to drive from San Francisco Towers to 540 Brannan; Joan thinks getting to Potrero Hill won’t be any harder.

Back in the old days, flowers were arranged and delivered from Whole Foods, which cost something like $48,000 to $60,000 a year. When Flower Committee volunteers took charge, the cost went down to $10,000 to $12,000 a year. This is one of the many reasons why we should be grateful to the Flower Committee.