In early January, St. Paul’s Towers honored Eric Hubert with a Lifetime Achievement Award for 50 years of service. Both as a former staff member as well as a long-time resident, Hubert’s impact on the Towers’ can be felt to this day. 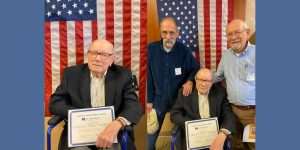 Originally from Orange, Texas, Hubert was working as an administrator at an Episcopal Church in Oklahoma when he first learned about St. Paul’s Towers. During a visit to Los Angeles to introduce then-Governor Ronald Reagan on behalf of the National Association of Church Business Administrators, Hubert met Father Darby Betts. Betts, who co-founded Covia (then called the Episcopal Homes Foundation), invited Hubert up to Oakland to see the retirement community that he was building, St. Paul’s Towers.

After introducing Hubert to Oakland and his new community, Betts invited Hubert to become the administrator for St. Paul’s Towers as well as St. Paul’s Episcopal Church, the parish next door –starting the very next day! Hubert said “of course,” a decision that would bring him permanently to Oakland, the city he still calls home.

During his first few months on the job, Hubert lived with the Betts family in their home in Piedmont while he searched for an apartment. It was the start of a lifelong friendship with Betts. “We became brothers,” Hubert notes. “Working with Dr. Betts was the greatest experience.”

As the administrator for St. Paul’s Towers, Hubert helped create the groundwork for what flourishes to this day. He hired the first 100 employees across all five departments, interviewing each to make sure that they were a good fit for the community and would fully support the residents. During his time as administrator, Hubert also spoke about St. Paul’s Towers to raise awareness for the community and planned programming.

The programs that Hubert is proudest of are the music concerts held every Monday night. As with all of the programming that he brought to the community, he worked hard to make sure that he was bringing in experienced professionals to share their craft. Now, as a resident, he enjoys the same quality of music that he helped usher into the community at its start.

As a founding member of St. Paul’s Towers, Hubert not only interviewed staff interested in working in the community, but met with prospective residents as well. The aspect that Hubert always stressed to people considering the community is that St. Paul’s Towers is a place where “residents don’t lose their independence.” In his work as an administrator, working on staffing, programming, and more, Hubert made sure that the community was a space where residents could live with the same level of independence as they had experienced living in their own homes.

After 23 years as an administrator for the St. Paul’s parish and the St. Paul’s Towers community, Hubert retired from the position. Looking back, Hubert says, “I loved every moment of those 23 years.” In honor of all of his hard work and all he had done for the community, as a retirement gift, St. Paul’s Towers raised the money to send him on a month long trip to Europe to say thank you. He spent most of his trip in London though he did sneak over to Paris, where he had previously spent time while in the army as Secretary to the Signal Officer.

The trip brought back memories of this previous time in Europe, including when he sold Alice B. Toklas and Gertrude Stein a pack of cigarettes for $30 at a lecture. “I never went out without cigarettes, soap, and a bar of chocolate,” Hubert says. Though he never smoked, he would sell the cigarettes so he could buy tickets to the opera.

Hubert’s love of art and culture extended into his impact on the wider Bay Area community. He served as a trustee for Grace Cathedral in San Francisco and the Oakland Museum of California as well as supporting the symphony and other cultural institutions. His work across these organizations is invaluable and something that he looks back on fondly. In both his time at St. Paul’s Towers and the wider community, Hubert notes, “anything that I could get involved in, I was. Seeing where I could give my talents and leadership.”

After retiring, Hubert returned to St. Paul’s Towers as a resident because he “wanted to be in the best place.” “We tried to make St. Paul’s Church and St. Paul’s Towers exemplary” he says, and he believes “the same philosophy and policies hold today.” His hard work and dedication are clear within the community, from the enduring programming to Hubert’s favorite part of the community, “the caring staff.”