A New Nest, A New Chapter

Artist Madeline Behrens-Brigham’s solo show A New Nest, a New Chapter is currently on display at Finley Senior Center in Santa Rosa. After 30 years as an artist and activist in the Hayes Valley neighborhood of San Francisco, Behrens-Brigham has found a new home at Jennings Court, a Covia Affordable Housing community.

Behrens-Brigham helped to shape the Hayes Valley neighborhood of shops and restaurants that we know today. She opened her mid-century furniture and art store, Modernology, on Hayes Street in 1990, shortly after the Loma Prieta earthquake which damaged the freeway running through that part of town. She was part of the committee that went to CalTrans to lobby for the freeway running to be torn down – a change that led to the revitalization of the entire neighborhood.

“At one point I had keys to all the stores,” says Behrens-Brigham. “If the owner would get sick, they’d call and ask me to open the stores.”

Behrens-Brigham also organized block parties, co-founded the Hayes Valley Art Coalition, and also served as a community board member of Legal Assistance for the Elderly, as a result of her own painful experience. 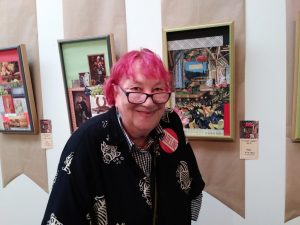 Madeline Behrens-Brigham and her art

“For ten years I was pressured to leave my apartment in San Francisco, the landlords doing everything to get me out of the place,” Behrens-Brigham explains. “I was in a rent controlled apartment, but I’d come home and the manager of the building would invite the sheriff over. My landlord was a church, and for all the words on their letter head, they didn’t seem to care about me.”

With an annual income of $11,000, Behrens-Brigham found herself priced out of even many low-income apartments. She signed up for waiting lists and waited. She got to number 26 on the list for housing in San Francisco. When she asked how long it would be before she got to the top of the list, they told her it would be 11 years.

When the call came from Jennings Court, she and a friend drove up so she could see it for the first time. Though she hadn’t wanted to leave San Francisco, she knew this was her opportunity and took the apartment.

“When she first came here she had dyed blue hair and people were taken aback by that,” says Housing Administrator Sadie Bracy. “It was the talk of the town.”

“Now I have bright pink hair,” Behrens-Brigham notes. “It’s not so much that I wanted bright hair, but [the stylist] needed to teach others in the salon.”

Behrens-Brigham currently serves as the Jennings Court Resident Council president. “My friends in San Francisco, knowing how involved I was politically, are laughing saying, of course we knew you’d become president.”

Getting a one-woman show “was a little bit serendipitous. I didn’t put my name forward. I didn’t believe I would qualify.” Though she offered to share the show with others, Finley Senior Center encouraged her to do a solo show.

Her art show illustrates through mixed media the new life she is building in Santa Rosa. “I went through a period of grieving to have left after 30 years. But now, I can honestly say, things are changing so much in San Francisco it’s not my town any more. The coffee shop is now a caviar bar.

“I’m making a new nest here and new chapter. I truly have done quite a few things in my life that other people consider unusual. I was a personal chef. I’ve done a number of interesting things. Some people have said, ‘When are you going to write a book?’ Well, I can’t write a book; I’m still writing new chapters.”

A New Nest, A New Chapter is on exhibit through February 22, 2018 at Finley Senior Center, located at 2060 W College Avenue in Santa Rosa.